Power Station was a supergroup made up of singer Robert Palmer, bassist John Taylor and guitarist Andy Taylor of Duran Duran, and former Chic drummer Tony Thompson; Bernard Edwards, also of Chic were also involved on the studio side as recording producer. The band was formed in New York City late in 1984 during a break in Duran Duran's schedule which became a lengthy hiatus. The band was named after The Power Station recording studio where their album was conceived and recorded.

On 23rd July 1983 Duran Duran's benefit concert at Aston Villa football ground 1983 took place in aid of MENCAP.Duran Duran had been known to be big fans of Robert Palmer so he was invited to take part.The event was very special especially with the fans and their friendship was hatched.

After Duran Duran's third album Seven and the Ragged Tiger, the members of the band split into two projects. One of these was the band Arcadia, which developed the melodic and atmospheric aspects of the Duran Duran "sound". The other was the Power Station, in which John and Andy Taylor worked with Palmer, Thompson, and Edwards to create a hard-rocking, rhythmic sound. Roger Taylor was mainly the drummer for Arcadia, but also contributed percussion to the Power Station.

The group began as something of a whim -- it was a one-time gathering of friends to provide backing to model and would-be singer Bebe Buell who wanted to record a cover of the "Get It On (Bang a Gong) " T Rex song.Both Taylors were eager to branch out from the synthesizer-heavy pop of Duran Duran and play some rock'n'roll; the participation of their idols from Chic lent the project a horn-inflected funk vibe that meshed surprisingly well with the crunching guitars and booming drums.

Soon the project evolved into the idea of a revolving supergroup; a tentative name for the band was Big Brother. The original plan for the one-album project was for the three musicians (Taylor, Taylor and Thompson) to provide musical continuity to an album full of material, with a different singer performing on each track. Those who were approached included Mick Jagger, Billy Idol, Mars Williams and Richard Butler (of The Psychedelic Furs), and Mick Ronson.[1]

The group then invited eclectic soul singer Robert Palmer to record vocals for the track "Communication". When he heard that they had recorded demos for "Bang A Gong", he asked to try out vocals on that song as well, and by the end of the day, the group knew that they had found that elusive chemistry which distinguishes successful bands. Before long, they had decided to record the entire album with Palmer. The group was quickly signed with Capitol Records.

On February 16, 1985, the band performed "Some Like It Hot" and "Bang A Gong" on the Saturday Night Live TV show; this was Palmer's only live performance with the band.

In March of 1985, the band issued the album Power Station. It is sometimes referred to as Power Station 33⅓ as the sleeve for the originally vinyl release bore that subtitle, indicating the speed of a turntable. Later compact disc issues used CD as a subtitle instead.

The album was produced by Bernard Edwards, with some informal assistance from Nile Rodgers.

Three singles were released from the album, two of them major hits. The first, "Some Like It Hot", reached number 14 on the UK Singles Chart and number 6 on the USA Billboard Hot 100. (The music video featured the transsexual model Caroline Cossey, credited as "Tula".) The second single was "Get It On (Bang a Gong) ", a cover of the 1972 T. Rex hit; Power Station's version went to number 22 in the UK and number 9 in the US, while competing against the Duran Duran single "A View To A Kill," which was a number one for Duran Duran. A third single, "Communication", was not as successful; it barely reached the Top 40 in the US, and disappeared after hitting a dismal number 75 in the UK. 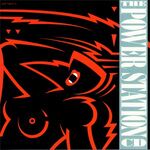 The album itself reached number 12 in the UK and number 6 on the US album chart. Incidentally, the album's cover graphics and color scheme, which were also used in the videos, were based on sketches by John Taylor. Later he said about the rather sexy sketches that he had used all his fantasies and considered himself - with self-deprecating irony - "an old pervert".[2]

The group's unexpected success led to two incompatible results: the band decided to do a summer tour in America, and Robert Palmer decided to record a solo album to take advantage of his sudden name recognition. This inevitably led to Palmer's departure from the band. (Tony Thompson, Andy Taylor and Bernard Edwards from Power Station contributed to Palmer's very successful 1985 solo album Riptide.)

Power Station went on to tour with singer Michael Des Barres (formerly of Silverhead, Checquered Past & Detective). Des Barres also performed with them at the enormous Live Aid charity concert in Philadelphia that summer.

Des Barres' friendship with actor Don Johnson led to the band's guest appearance on an episode of the TV drama Miami Vice. Similarly, his friendship with producer Joel Silver led to Power Station writing a song called "We Fight For Love" for the Arnold Schwarzenegger action film "Commando" (1985). The track was originally titled "Someday,Somehow,Someone's Gotta Pay".

The band folded late in 1985, as its members turned to other projects: John Taylor returned to Duran Duran, while Andy Taylor chose to leave Duran Duran in favour of a solo career. Tony Thompson was to take the place of John Bonham in a re-formed Led Zeppelin, but he was nearly killed in a 1986 car accident almost before that reunion could get off the ground. The reformed Led Zeppelin only played one gig at the Philadelphia Live Aid concert in 1985. Palmer continued his revitalized solo career.

The band reunited ten years later with its original members, including Palmer. However, divorce and drug rehabilitation forced bassist John Taylor to withdraw from the project before the album was complete. Bernard Edwards (former Chic bassist) stepped in and completed the album Living In Fear (1997) instead, and was prepared to tour with the group, but then died suddenly of pneumonia during a trip to Japan. The group was staggered, but decided to press on, and toured first with bassist Guy Pratt then Manny Yanes and second guitarist Luke Morley instead, to moderate success. The group quietly disbanded shortly after.

EMI released a new version of the album Power Station on February 21, 2005, to commemorate the album's 20th anniversary. The package includes the original 8 track album, 7 bonus tracks and a 40-minute 8-chapter DVD. Among the bonus tracks on the album is the Michael Des Barres-sung track "Someday, Somehow, Someone's Gotta Pay" (from the Commando OST).

Both Robert Palmer and Tony Thompson died late in 2003.