Greatest is a greatest hits compilation album and video by Duran Duran, released by Capitol-EMI on 3 November 1998 (CD version).

Greatest was an update of the 1989 ten-year anniversary compilation album, Decade: Greatest Hits. The new release featured songs from their eponymous debut album, right up to 1997.

The album was released by EMI after parting ways with the band after the disastrous Medazzaland album release in 1997, and marked the first of many releases designed to capitalize on the band's extensive EMI-controlled back catalogue.

To coincide with the release of the Greatest album in the United Kingdom, the song "Electric Barbarella" was released as a single. This track was originally released as a single in North America in 1997 to promote the Medazzaland album (which was never released in the UK).

To date, a full collection of Duran Duran's singles on one album still hasn't been released.

The album release was followed in 1999 by the release of a videotape compilation of the band's groundbreaking music videos, also entitled Greatest.

The collection was not released on DVD at the time, probably due to the band's disintegrating relationship with Capitol Records. 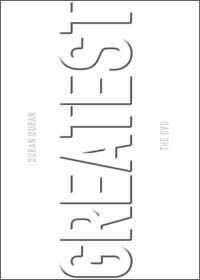 This collection was finally released on DVD in 2004 under the same name, with numerous hidden extras, including alternate versions of some videos and early interviews with the band. Some harsh criticism was raised over the DVD's extensive use of easter egg features, making it frustratingly difficult to find some of the more interesting material.

A) Girls On Film (6:26 - long uncensored version with alternate ending):

From the main menu, enter the "Galerie" by selecting the "A" in the word "GREATEST".

d) Midsummer Night's Tube Feature (4:31 - Nick and Simon discuss the recording and production of the album Seven and the Ragged Tiger):

f) View to a Kill Interview (1:52 - Paul Gambaccini talks with John and Andy):

From the main menu, enter the "Galerie" by selecting the "A" in the word "GREATEST".

The hidden tracks may be accessed directly using the number keys on a DVD player (or DVD remote control). This does not work from "inside" the disc's navigation menus -- the disc must be fully stopped (sometimes by pushing the "stop" button two or three times). There are several duplicates of standard videos among the hidden tracks, in addition to the easter eggs.